During Tamworth's annual Country Music Festival, there are numerous venues hosting just about every flavour of Country Music the visiting fans could ever want. However, for those locals and visitors who like plenty of full on, hard hitting Rock'n'Roll, the Imperial Hotel (the Impy) is the place to be. The Impy runs two stages during the Festival - the main one outdoors in the beer garden, and a smaller one inside. We provided production for the main stage during the 2005 Festival.

The main outdoor stage is a little unusual in that it is small and situated square in one corner of the beer garden area. It has a peaked-roof type tent cover, and a side extension which is not under cover. While we were there, the hotel provided another tent to cover the Foldback desk area, but the main PA speakers and most of the lighting was essentially outdoors. Due to the lop-sided nature of the stage area, the left speaker stack was only half the size of the right hand one, behind which was situated the Foldback area. FOH mixing position was also a bit of a compromise, being on the extreme left hand side of the upper (covered) beer garden level.

Despite the compromises required, everything ran smoothly, and everyone was happy with the sound and look, including the excellent artists who played. These included The Australian Eagles Experience, Steve Gibson, Dexter Moore, Den Hanrahan, local band Out Of The Blue, and Vanessa Amorosi. 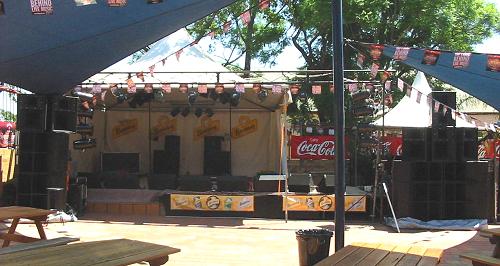 Overall view of the stage. Here you can see the uncovered side extension and the overall lop-sidedness. 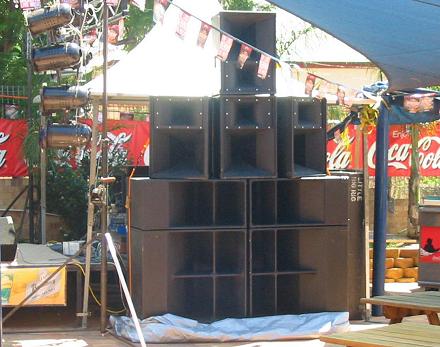 The right hand PA speaker stack - plenty of punch to keep the rock'n'roll fans happy. The Foldback area was positioned behind this stack. 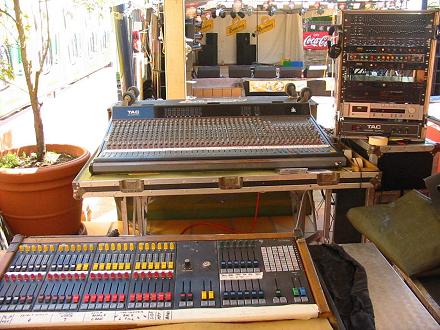 The Front-of-House mixing position with the stage visible in the background. 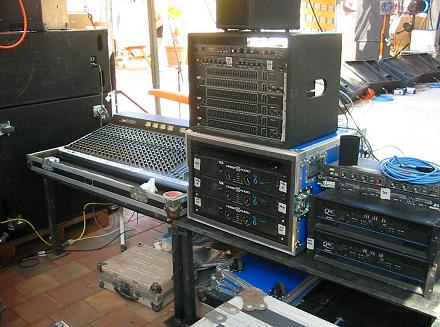 Foldback mixing from side stage behind PA speakers allowed easy communication with the artists. 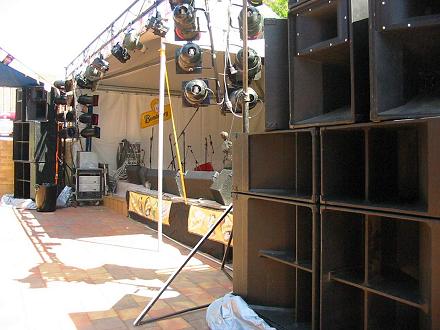 A view across the front of the stage, showing lighting supports and amplifier rack positioning. 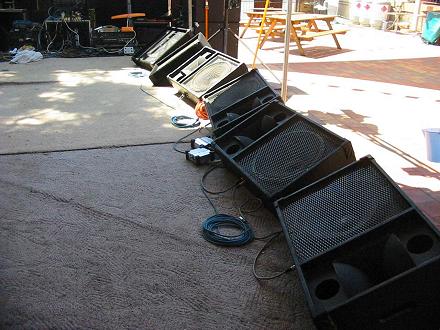 Plenty of Foldback wedges so the various artists could hear everything clearly. 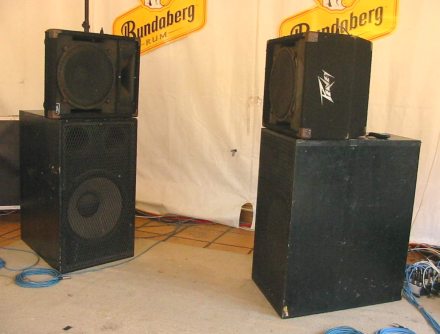 We had no complaints from any drummers not being able to hear - 15" wedges atop 18" subs into the kidneys...... 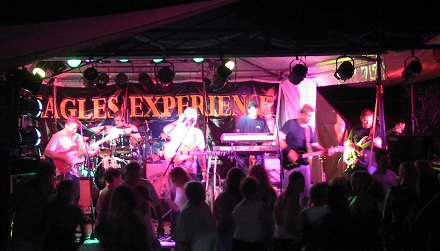 One of the night time shows - the Australian Eagles Experience.