For two or three weeks every January, Tamworth explodes with one of the most widely recognised Country Music Festivals in Australia, with a host of local and visiting Country Music artists playing the many venues established around the city.

The West Tamworth League Club hosts a number of venues within its grounds, from the Irish Bar, Legends Bar and Blazes Auditorium within the club building, to the Lyric Theatre, Cowboys Bar and Country Club Pavillion situated on the grounds. We had the pleasure to provide production in the Cowboys Bar for a number of years.

The Cowboys Bar is essentially a large steel framed tent, some 20 metres by 25 metres with attached bar and diner, located on the club's football field. With the floor being the field's natural grass, the atmosphere is informal and relaxed. The stage was located along one of the sides (much to our dissapointment), providing us with a low ceiling height and a wide spread audience. Power was also at a premium with the Club's resources stretched to the limit.

This venue has been home to several established events including the Tomkins Guitar Showcase, and the North Queensland Showcase. It has also hosted the Telstra "Road to Country" talent quest finals as well as The Outback Club radio broadcasts. Other well-known artists include Alby Pool and Chris Callaghan. See the Gallery section for photos of some of these artists. 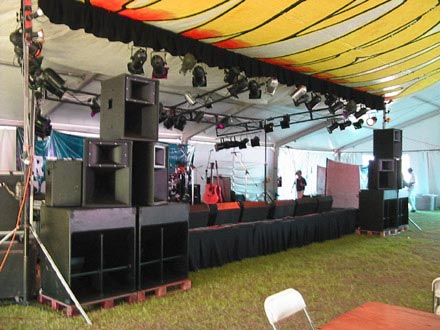 Production wise, this was a fairly standard layout with ground stacked PA boxes situated either side of stage. However due to the audience width, more boxes than normal were needed to cover the required angles. There was also a decibel limit in force due to the proximity of neighbours, which meant the PA system only just idled (which increases fidelity anyway).

The low ceiling height at the rear of stage precluded the hanging of lighting here, so we constructed an overhead grid of trussing to enable rear lighting to be situated at a higher level. Due to power restrictions, extensive use was made of smaller Par56 lights, with the more powerful Par64's being left in the truck.

The overall stage layout can be seen in the photo above right. 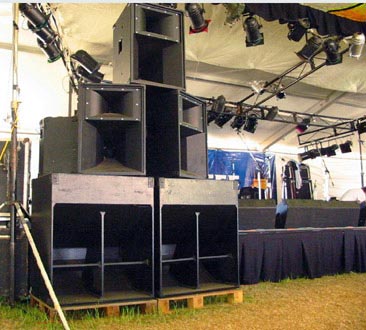 Closeup shot of one of the PA stacks - two Centauri double 15" subs underneath three Centauri MH12400 top boxes. Overkill in the power department but neccessary to achieve the wide coverage. 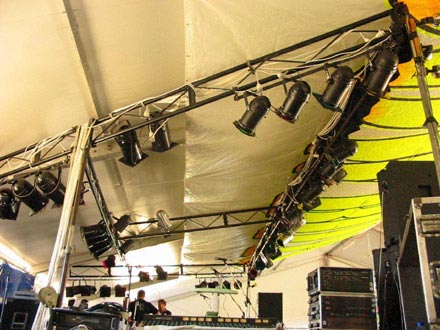 Overhead view of the lighting trussing. This arrangement overcame problems with low ceiling height and made use of cyc lighting the sponsor's backdrop. 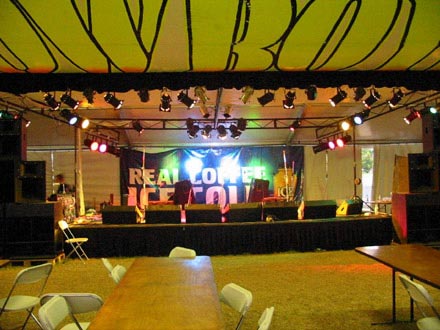 Front view of stage with a few lights on. The large "Cowboys" sign visable at the top was supplied by the Club. 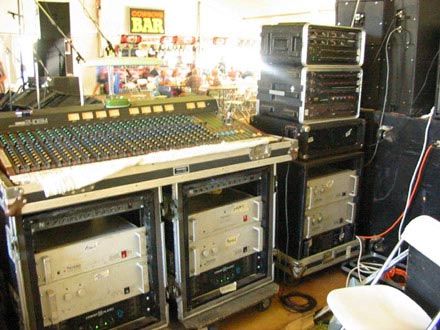 The Foldback control centre tucked away to one side of the stage. This provided the facilities to allow the musicians to hear themselves and each other, whatever their requirements. 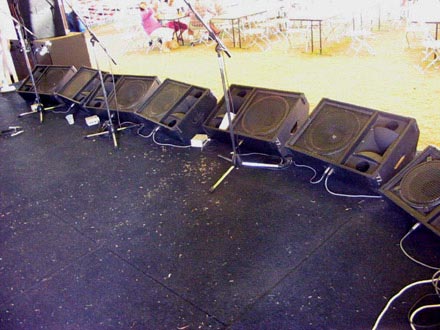 Comprehensive stage foldback allows musicians to hear exectly what they want without exessive volumes. Also visible between some of the foldback wedges are some direct injection boxes. Situated around the stage, these "DI" boxes allowed any combination of accoustic instruments to be plugged into the main sound system.