Tamworth's annual Carols by Candlelight, organised as a fundraiser by the Children's Medical Research Institute, always proves to be a major drawcard for capacity crowds. We have been the successful tenderer for production at this event for a number of years. The audience are treated to a variety of family entertainment, including Prime TV's "Prime Possum" and the obligatory appearance by Santa Claus, music by the Tamworth Highland Society Pipe Band, carols led by various local artists, ably backed by the likes of the Tamworth High School Concert Band, Tamworth Conservatorium Concert Band and Choir, or the RSL Brass Band. Feature artists have included Southbound, John Muller Big Band, and local youth bands. The venue for this open air family concert is Tamworth's Bicentennial Park.

This is one of the biggest productions in terms of audience size and coverage area we undertake. This size and the venue itself provided plenty of problems to solve, as outlined below. 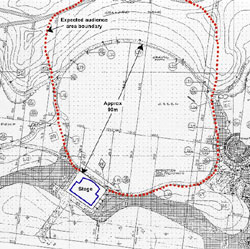 Bicentennial Park features a purpose-built covered entertainment stage (which unfortunately faces the afternoon sun), a large flat lawned area which then slopes up to the river bank, shade trees, gardens, landcaped pond (with ducks!), fountains, walking tracks and Country Music statues. As such, it is a popular venue for events and gatherings.

The flat audience area is a little lop-sided and bounded by a gravel path around 90 metres from stage. The audience typically extends up the river bank, bringing the coverage distance to some 120 metres (see map at right - click on it to get a larger view). Not shown on the map are shade trees either side of stage, under which many of the audience prefer to sit (some of these can be seen in the photo below taken at the time of planning - the foliage was much denser at the time of the concert). These trees cause sound degradation if the PA system is located too high.

Composite view of the park from stage, showing trees either side.
Sorry about black line down the centre - photos didn't quite line up! Click photo for a larger view. 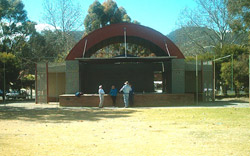 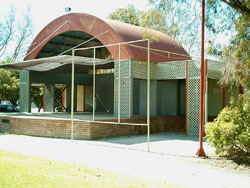 We had to achieve clear sound to the majority of a spread out audience without deafening those at the front.

It was evident early in planning, that to cover the required area, multiple speakers would have to be placed around the ground, time delayed to prevent echos. It was decided to concentrate on covering only the area bounded by the gravel path, with consequential coverage up the river bank being a bonus. We also had to adequately cover the areas under the trees either side of stage. The proposed plot is shown below (click on the diagram for a larger view). 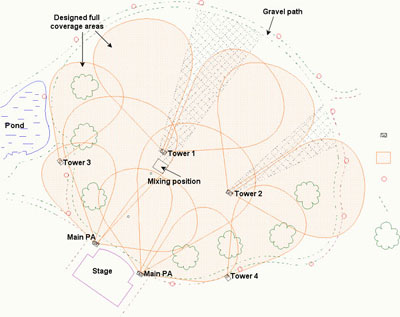 We placed two main scaffolding towers, each supporting two hi-mid speakers with a subwoofer underneath, towards the centre of the ground to cover the rear audience. Another two smaller towers, each supporting one hi-mid speaker with one subwoofer, were located either side of the ground to fill under the tree areas. The two groups of speakers were electronically time delayed by different amounts to eliminate echo effects. The front mixing position tent was offset to one side to improve visiblity for the audience. The main PA speakers either side of stage were stacked and angled to provide long forward coverage as well as shorter coverage to the centre front and side tree areas (see photo of main PA below). The speakers utilised were part of our inventory of Centauri long throw horn-loaded cabinets, MH12400 hi-mid boxes on 15C subs. Total PA system power was some 15000W RMS.

For the first show, some 8000 plus people did extend right up the river bank and the PA system provided clear coverage to this distance - better than we were expecting. One of the main PA stacks - note the lower boxes angled to cover wide. Tower No.1 (No.2 same as this) utilising two Centauri MH28450 speakers angled to cover each side, and the Cerwin Vega subwoofer underneath. Cabling between the towers is installed overhead to prevent accidental tripping. 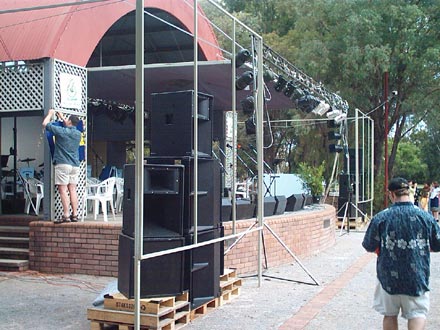 View across front of stage. Front lighting and trussing support can be seen here. Plenty of Foldback sound on hand so that performers have no problems hearing themselves.

Tower No.4 can be seen in the background, surrounded by red barrier fence. 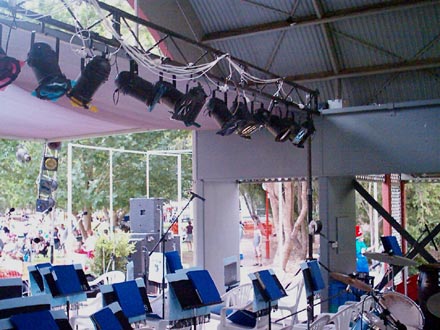 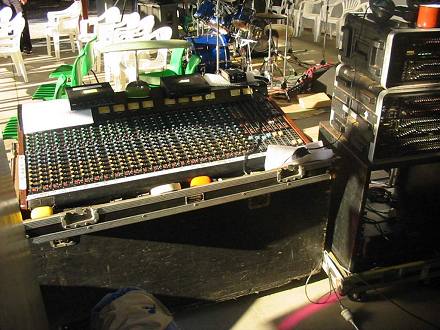 Up to 8 separate stage foldback mixes supplied from Yamaha 2408 foldback desk at side stage. TAC Scorpion 32 channel mixing desk at the heart of the control tent. One of the finest analogue mixing consoles around.