Jazz on the Green - Nundle

2004 saw the inaugural "Jazz on the Green", organised as a fundraiser by the Nundle Golf Club. The idea was a relaxed family day outdoors on the picturesque golf course greens listening to Jazz music. Following the success of the first show, it became an annual event, and we are pleased to have provided the production for all of these.

Rather than having to construct some sort of stage, it was decided to utilise an existing concrete slab, attached to amenities, as the stage. This structure is all that remains of the old clubhouse - having been replaced with a more modern building in another location a number of years previous. Whilst this location was ideal, there is no mains power available, so a generator is required. One of the reasons we were the successful tenderers for this event is our use of high-efficiency speaker systems - our generator requirements were considerably lower than other tenderers.

Unfortunately, in 2005 rain interrupted the event, and the headline act relocated to the clubhouse, leaving us to pack up in the wet - the photos below are from that day.

Overall view of the stage. The stage roof had not been completed, so we had to rely on tarps to provide cover.
Note also the tarps in readyness on the speaker stacks - there had already been a couple of short showers before showtime. The offset placing of the speakers is due to the audience area being at a slight angle to the front of the stage. 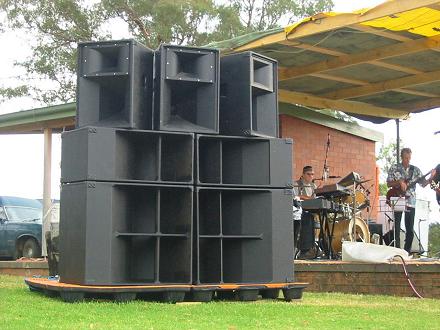 Left hand PA stack - the high effiency horn-loaded top boxes provide excellent projection and defined coverage. Additional low-end cabinets were used here, as the main act is known to "rock it up" somewhat, and plenty of headroom to keep the sound clean was of paramount importance. 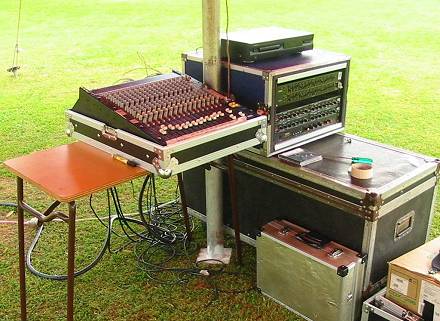 The Front-of-House mixing position. As the channel requirements were light, we made use of our two Allen&Heath MixWizard desks, one here and the other on Foldback duties. 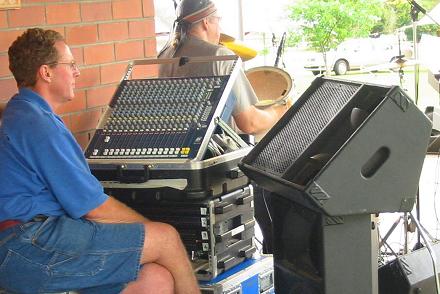 Ian on duty with the other MixWizard on Foldback at the back of the stage. Using a separate mixer for the band's monitoring allows optimisation on stage without adversely affecting the audience sound. Note also the wedge speaker to allow the Foldback Engineer to hear exactly what the musicians are hearing. 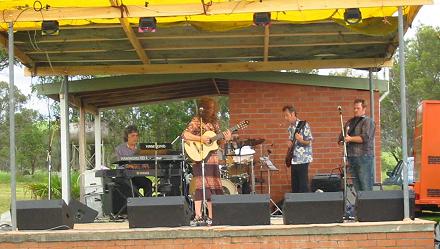 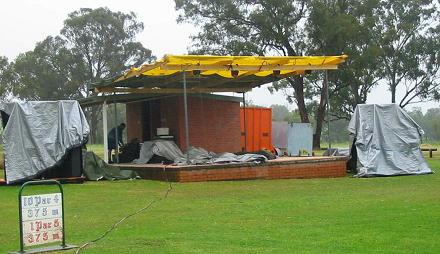 The scene after persistant rain put an end to proceedings due to safety concerns. The die-hard fans had collected under the many tents around the ground, and we were able to continue during light rain - but when the stage roof started leaking that was the end of the show. Fortunately, we were prepared for this and had equipment covered quickly. 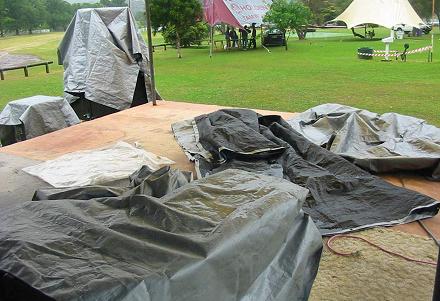 Hard to see in this pic, but a lot of water flooded the stage - just one of the things we are prepared for when doing outdoor shows.