'Hats Off To Country' Festival

July 2002 saw another installment of the increasingly popular 3 day mid-year Tamworth "Hats Off To Country" mini festival, with quite a number of venues participating. We secured production services at the West Tamworth League Club's Legends Bar.

The Legends Bar, one of three areas opening off from the central bar, is an interesting venue. It is small and wide, with the depth being limited by the main thoroughfare to the club's auditorium. A large percentage of the audience is located to the sides of the stage, predominately to the right closest the bar. As the bar serves three distinct areas, it is quite busy and volume levels from stage are a primary concern. The audience location also presents problems with sight lines - a standard stacked PA system would obscure performers from a large number of patrons.

To address these issues, we first erected trussing in a trapezoidal shape over the stage area. From this we hung six Centauri 115EVW boxes, three per side, focused to provide the wide coverage desired whilst providing a sound 'hole' towards the bar area. Four small subwoofer boxes were placed on the floor near the trussing support trees. As the main speakers were right against the ceiling, the performers could be seen from any angle. 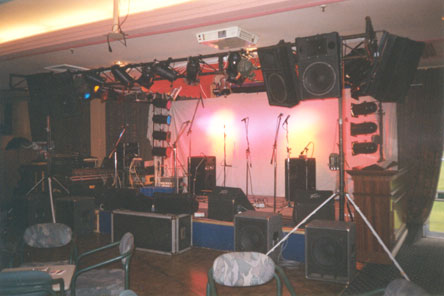 In this view of the stage, the flown and floor speakers can be seen - note the open sight lines right around the stage. 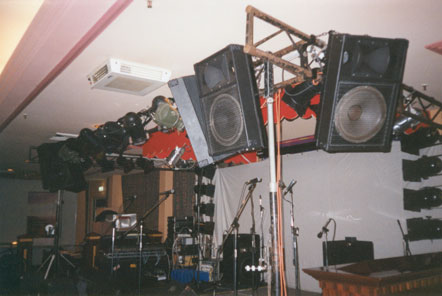 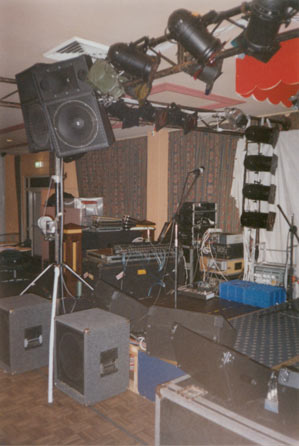 More detail of the left and right speakers. Note in the photo above, there appears to be a large gap between the centre and right hand speakers - the bar area is in the direction of this gap. 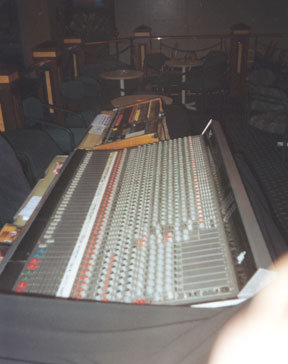 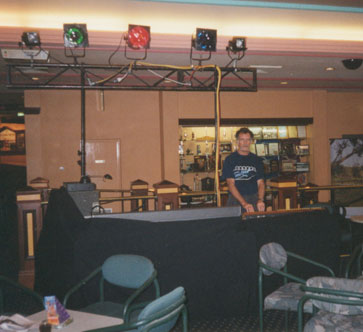 Views of the main mixing area at the back of the audience.

Due to the low ceiling limiting lighting possibilities. we made effective use of side and rear cyc lighting, which can be seen in the top photo. We also erected a second truss just behind the main mixing position to provide stage washes and soloist lighting with minimal shadows, as shown in the view from stage above.

All in all, a successful 3 days of a variety of acts including the ever popular Finn McCool and local singer Pam Spencer among others. One prominent visiting musician commented that this was the best PA and stage sound he has heard in his many years of playing in this venue.

Update: Since this show, this venue has been remodelled, and the stage is now positioned at the auditorium end of the room. Whilst this makes production a little easier in so far as being able to use conventional ground stacked speakers, the mixing position is now somewhat of a compromise. Patrons at the front are now subject to higher volume levels, and all sound is directed towards the bar.

We feel that the original stage positioning provided a more intimate atmosphere, and the above production techniques covered the room better, but that's progress.